Review: 'Zombieland' on 4K is a double tap of awesomeness 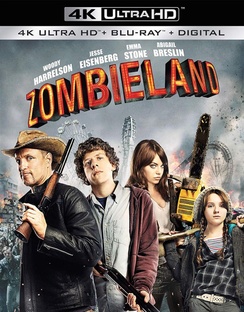 There are few films that truly sneak up and surprise you these days. What with the constant information overload of the Internet and social media, it's practically impossible to be blown away by an unknown entity. This is especially true for movies where a subversive spoiler culture exists that gets some sort of perverse joy out of ruining films for the uninitiated.

If you couldn't tell, I really don't like spoilers. It's really a hazard of the job though and it's something that I try to avoid whenever possible. One film that completely blew me away and came out of nowhere debuted in theaters a decade ago and is now, finally, available on 4K UHD. That film is, of course, Zombieland.

With the sequel due out in theaters later this month, this week is a perfect time to pick up the 4K UHD and revisit a modern comedy classic. I'm not sure why this film seemed to fly under the radar in 2009, but it has quickly attained cult status and is one of the best comedies to have been released in the 2000s.

The film follows four survivors of a mysterious plague that has basically wiped out humanity and left countless number of zombies in its wake. Each of them is on a journey to find something whether it's Columbus and a family or Tallahassee and the last elusive Twinkie, these four will stop at nothing to realize their dreams in Zombieland.

As I mentioned above, with Zombieland: Double Tap coming out in theaters on October 18, the timing of this 4K UHD version of the original film isn't a big surprise. It also happens to be the 10th anniversary of Zombieland's release, so it's a perfect storm that should have Sony counting plenty of box office Benjamins.

I had a bit of trepidation when I sat down for this review because I was hoping that the film still holds up to my lofty expectations. It had been a hot minute since I last watched it. That's what happens when you have kids. But, with the sequel coming out, I wanted to revisit Zombieland so that I could keep all the details fresh in my head when I see the sequel.

I'm quite relieved to report that not only does it hold up to the ravages of time, but like a fine wine, it actually seems to have improved over the extended period since I last watched it. In the last decade, it seems that zombie films and TV shows have proliferated out of control, similar to the fictional virus that always causes a zombie epidemic. So, with all of thise noise, would Zombieland remain a unique voice in this crowded genre?

The answer is a resounding yes. In fact, there are several jokes that seemingly hit harder now with our current political climate than back when the film first debuted. Even the hush-hush cameo in the film still works despite anticipating the actor's eventual scenes. Of course, that begs the question as to whether there will be a top-secret cameo in Double Tap. Personally, I think that there will definitely be one, but I'm stumped as to who that might be.

The new video transfer has been upscaled from the original 2K video track with added HDR 10 support. The result is that the film has been cleaned up a bit and really shines in the dark scenes at both the beginning and the end of the film. In particular, the lights of the amusement park in the climatic sequence really do pop on this transfer and the difference is quite remarkable from the Blu-ray.

While the film has been cleaned up, they kept enough noise and levels to maintain the overcast tone of the movie. I always felt that in watching this movie, it was always on the cusp of a massive rain shower to clean up the plague-riddled planet and that aesthetic has been maintained throughout.

The real upgrade is on the soundtrack where the new Dolby Atmos audio track brings all of its weapons to bear on the many bloody zombie sequences. Whether it's in the grocery store or that odd curio shop that they destroy, the new track really puts the audience in the middle of the action.

There is one new bonus feature on the 4K UHD and that is a retrospective of sorts in which the cast and filmmakers take a look back at the film after a decade. Naturally, this was pretty easy to attain when they were filming the sequel, but it's a nice piece to include in this release. Of course, it might also show up on the eventual home entertainment release of Zombieland: Double Tap, but it's a nice bonus for a release that you should be buying regardless of bonus features.

Speaking of, there is a potpourri of legacy bonus features so that if you're concerned about upgrading from your current Blu-ray, don't be. This 4K UHD release is now the definitive version of Zombieland and will make for a nice companion piece when the sequel hits 4K UHD next year.