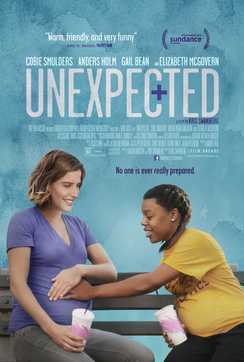 As you may have noticed from that byline above, I'm not your usual Monday Mixer host. As the British like to say, John is on holiday this week. He's enjoying the sandy beaches while I slave away over a carpal tunnel-inducing keyboard. Not that I'm bitter. Let's make the best of this, shall we?

I hope you had a relaxing weekend. I did. One of my weekend highlights was "play testing" a new card game my friend has developed. As fellow movie fans, you guys might be interested in following its progress. It's a movie-making card game named Buy The Rights. It's a bit similar to Apples to Apples and Cards Against Humanity except that you build a movie using four card types and then pitch it to the game's producer. It's pretty hilarious. I'm sure I'll be sharing more information on the game in coming weeks.

Thanks for letting us test out the game. It was fun! @buytherights

Wow, the Pitch Perfect franchise is stronger than I thought. In its first week Pitch Perfect 2 raked in over $70 million for first place. That's $5 million more than the first film made during its entire run. The other big film to debut this past weekend was Mad Max: Fury Road. It somewhat underperformed bringing in $44 million, enough for second place. This reboot of George Miller's post-apocalyptic action films is getting some of the best reviews of the year. It has a 98% rating on Rotten Tomatoes, enough for their Certified Fresh designation.

Avengers: Age of Ultron fell to third with nearly $39 million. The sequel's domestic total is now over $372 million. The first Avengers film had made $457 million after three weekends on its way for a $623 million total.

This weekend sees the release of two dark horses, Tomorrowland and the Poltergeist remake. Predicting these films' performance is tough. Either could be big or fizzle. Tomorrowland, with the might of Disney behind it, has the most potential. It should knock off PP2 but I don't think it'll match $70 million. Cineplexes are starting to get crowded with summer films now. It's increasingly tough to have a big opening frame. Warmer weather doesn't help either.

John left me with a handful of Quick Hitters that he accumulated through last week. I have a few of my own. Between us we have a bounty of movie news tidbits for you to enjoy.

Until next week (or the week after, as it's a holiday for everyone next Monday) -- mix well!