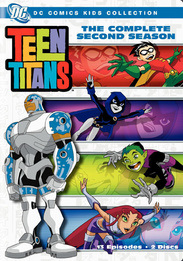 Dangerous enemy or lifelong friend? That's the question when Terra, a free-spirited teen with awesome Earth-manipulating powers, rolls into town. As a skilled fighter, she makes a powerful addition to the Titans, and as a fun-loving, no-holds-barred hero, she jives instantly with them. But the Titans aren't the only ones interested in her. Robin's archnemesis Slade is on the prowl for an apprentice, and Terra's volatile powers and personal vulnerability make her a perfect target for his twisted plans. Trusting this newcomer could be a fatal mistake for the Teen Titans! Throughout 13 action-packed adventures from the hit TV series, Season 2 provides earth-shattering entertainment!