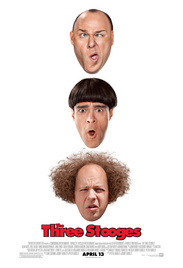 Left on a nun's doorstep, Larry, Curly and Moe grow up finger-poking, nyuk-nyuking and woo-woo-wooing their way to uncharted levels of knuckleheaded misadventure. Out to save their childhood home, only The Three Stooges could become embroiled in an oddball murder plot...while also stumbling into starring in a phenomenally successful TV reality show.

Rated PG for slapstick action violence, some rude and suggestive humor including language.