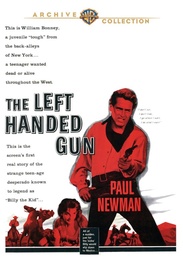 His name: William Bonney. His legend: Billy the Kid, the fabled gunslinger of The Left Handed Gun. The West had never before seen the likes of this Brooklyn-born desperado, a troubled teen who wrote his name in blood on history's pages. And the genre had never before seen a performance like the one by Paul Newman. He displays a complex, twitchy moodiness that captures the killer's half-boy, half-man nature. Another major presence is first-time film director Arthur Penn (Bonnie and Clyde, Little Big Man), exploring a theme he would return to again and again: the alienated outsider confronted by a hostile society. What Newman and Penn put on-screen in 1958 was new, provocative and startling, so it's no surprise the movie's initial reception was mixed. Today, it's hailed as a unique and influential Western.