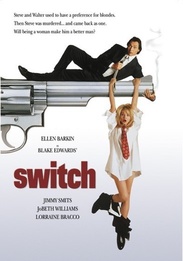 Steve Brooks (Perry King) is a notorious lady's man. He's got a good friend in Walter (Jimmy Smits), but a lot of enemies among the women he's two-timed-which is why three of them gang up together to murder him. But God isn't sure Steve's ready for Heaven so he's given a second chance to prove himself. Steve will go to Heaven, but only if he can find one woman who truly loves him for who he is. And there's a catch. To be sure Steve doesn't use his manly looks and good harm, God sends Steve back as a gorgeous woman. Now Steve is Amanda (Ellen Barkin) and Amanda is Steve-about to find out what it's like to be a good-looking woman being looked at by a world of not-so-good guys! Can Steve find his way to Heaven while trying not to fall off his high heels.; trying to be 'just friends' with Walter; and trying to seduce a woman who only likes women as a man in a woman's body? It's a hilarious turnaround when a helluva lady's man becomes one helluva lady in Blake Edwards' most hilarious and outrageous comedy ever.