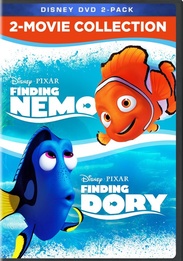 Finding Nemo
A father clown fish and his son become separated during their excursion to the Great Barrier Reef. Nemo, the son, is captured and becomes a part of a Dentist's fish tank overlooking the Sydney harbor.

His father, Marlin, gathers his courage and sets out to rescue his son and bring him back to his family of fish.

Finding Dory
Disney & Pixar's Finding Dory reunites everyones favorite forgetful blue tang, Dory, with her friends Nemo and Marlin on a search for answers about her past. What can she remember? Who are her parents? And where did she learn to speak Whale?