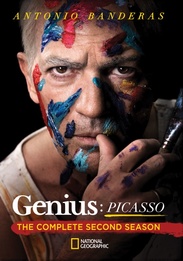 Following the success of GENIUS: Einstein, National Geographics first fully scripted drama, this wonderful anthology series returns, detailing the life and loves of the Spanish artistic genius Pablo Picasso -- as well as highlighting his significant and wide-ranging contribution to modern art. Picasso is brought to life by Hollywood legend Antonio Banderas (The Legend of Zorro). Joining him as the younger Picasso, who rejects academic study and joins a circle of young bohemian artists and writers struggling to make it in early 20th century Spain and France, is Alex Rich (True Detective).The series follows the tumultuous marriages, passionate affairs and ever-shifting political and personal alliances that sparked Picassos creative drive and pushed his boundaries of artistic expression, leading to his worldwide renown as a genius. It explores the Spanish expatriates devotion to his craft and we also learn of his relationships with the other well-known personalities that crossed his path, including Coco Chanel, Henri Matisse, Marc Chagall and Jean Cocteau.Filmed in locations throughout Europe, including numerous places where Picasso lived and worked, GENIUS: PICASSO features a stellar cast, including Samantha Colley and Johnny Flynn who return from GENIUS: Einstein in new roles.