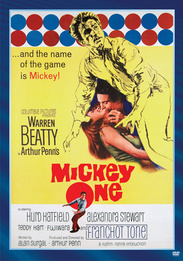 Considered ahead of its time and perhaps it still is this unusual drama, inspired by the French New Wave, brought Warren Beatty and producer-director Arthur Penn together for the first time two years before their landmark Bonnie and Clyde. Beatty stars as a Detroit night club comic who incurs the wrath of The Mob (he doesn't know why) and flees to Chicago to start life anew but still living in fear. But the plot is secondary to the look and sound of this film (a favorite of Martin Scorsese), which boasts a score by Eddie Sauter and stunning photography by Academy Award -winner Ghislain Cloquet (1980, Best Cinematography, Tess). Alexandra Stewart, Hurd Hatfield, Franchot Tone and Jeff Corey co-star in this one-of-a-kind motion picture. Incidentally, much of it was shot in what is now Oprah Winfrey's studio. Newly remastered.