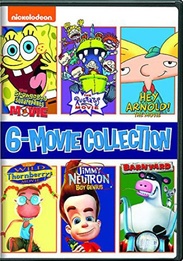 HEY ARNOLD! THE MOVIE: Nickelodeon's animated series comes to the big screen as fourth-grader Arnold, best buddy Gerald and the rest of the gang face an industrialist with plans to bring the wrecking ball down on Arnold's neighborhood. JIMMY NEUTRON: BOY GENIUS: Boy Genius, is trying to make contact with an alien civilization. Unbeknownst to him, a satellite he launches (okay, it's the kitchen toaster, but it works!) is picked up by an alien species. In the dark of night the aliens fly their war ships-looking like a fleet of rubber chickens to earth and abduct all the parents in Jimmy's hometown of Retroville. So it's up to Jimmy to create a fleet of space ships from the rides at the town's new amusement park (hey, he's a genius, remember?) and launch them into orbit in a bid to rescue the abducted parents of Retroville. But Jimmy better hurry! Because the aliens are preparing to use the parents as human sacrifices! With his robotic dog, Goddard, and his best friend, Carl, by his side, Jimmy and the rest of the kids in Retroville take to the skies on a trip that's sure to be a blast! Featuring the voice talents of Patrick Stewart and Martin Short as the evil King Goobot and his sidekick Ooblar. WILD THORNBERRYS MOVIE, THE: The Nickelodeon cartoon series The Wild Thornberrys gets its first feature-length animated film, directed by show creator Cathy Malkasian with a screenplay by Kate Boutilier (writer of Nickelodeon's Rugrats in Paris). The main character is 12-year-old Eliza Thornberry (voice of Lacey Chabert), a braces-and-glasses-wearing eccentric girl in an adventurous family of travelers. Due to an interaction with a shaman, she has been granted the special power of communication with animals, as long as she promises not to tell anyone about it. Her powers are challenged when her parents, Nigel (voice of Tim Curry) and Marianne (voice of Jodi Carlisle), decide to take the family on an African safari to make a nature documentary. Also along for the trip is snobby sister Debbie (voice of Danielle Harris), feral youngster Donnie (voice of Flea from the Red Hot Chili Peppers), and pet chimpanzee Darwin (voice of Tom Kane). After her new Cheetah cub friend is stolen by poachers, Eliza is determined to get involved. However, the stuffy Thornberry grandparents get in the way by sending her to boarding school. It's up to Eliza and Darwin to defeat the poachers and save the cub. Also featuring the voice talents of Brenda Blethyn and Lynn Redgrave. SPONGEBOB SQUAREPANTS MOVIE, THE: Dive into a comedy adventure that's bigger, better and more absorbing than the rest - the movie debut of that undersea sensation, SpongeBob SquarePants! There's trouble bubbling up in Bikini Bottom, King Neptune's crown is missing, and Mr. Krabs has been accused of stealing it! Together with his best pal Patrick, SpongeBob sets out to treacherous Shell City to reclaim Neptune's crown and save Mr. Krabs, in a spectacular adventure filled with "over-the-top, under-the-sea action and non-stop laughs!"* Featuring the voice talents of Tom Kenny (SpongeBob), Alec Baldwin, Jeffrey Tambor, Scarlett Johansson and a special appearance by David Hasselhoff, The SpongeBob SquarePants Movie is an uproariously funny comedy. RUGRATS MOVIE, THE: Based on the popular Nickelodeon TV series Rugrats, this is the first full-length feature animated movie to star the little tots. It's the story of diaper-clad kids, told from a baby's point- of-view, and they were one of the hottest-selling toy franchises of the late '90s. The film features a hilarious musical number in the hospital nursery, where newborns have the voices of major rock stars that include Jakob Dylan (Bob Dylan's son), Iggy Pop, Lou Rawls, Lisa Loeb, and Patti Smith, to name a few. The story escalates when self-proclaimed leader Tommy Pickles is thrust into an impossible situation with the birth of his new brother, Dil Pickles. This new kid is grabbing all the attention and won't stop crying. With the help of other toddlers Lil and Phil, Tommy decides that the baby should be returned to the hospital for fixing. They all hop on their little wagon and take a high-speed ride straight into the deep woods where they realize they're lost. Chased around by animals (or so they think), the Rugrats clan must get home in one piece. Other celebrity voices include Whoopi Goldberg and The Rocky Horror Picture Show's Tim Curry, as well as Saturday Night Live's Andrea Martin and David Spade. BARNYARD: Move over, all you pretenders...here are the original party animals  the animated gang of Barnyard! This laugh-filled adventure stars Otis, a carefree cow who spends his days singing, dancing and playing tricks on humans...much to the dismay of his father, Ben. Wild, wacky and udderly hilarious, heres a herd of animated pranksters thatll keep you laughing out loud!