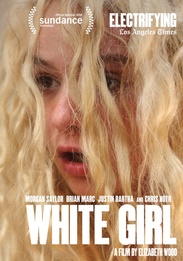 The most controversial film at the 2016 Sundance Film Festival, "White Girl" is an incendiary exploration of race, gender and privilege unfolding in an "intoxicating cloud of vice" (Los Angeles Times). Morgan Saylor, in a stunning breakthrough performance, is NYC college girl Leah. Equipped with platinum hair and a winning smile, she seeks out pleasure in any form. Between getting high with her roommate and snorting lines with her boss, Leah falls for Blue (Brian Marc), a young man who deals drugs on her corner. Within days the two are selling cocaine to her boss (Justin Bartha, "The Hangover") and his downtown friends and living the high life. Summer love crashes to a halt when Blue is arrested and Leah is left with a major bag of his coke. Enlisting the help of an overpriced lawyer (Chris Noth, Sex and the City), Leah finds herself deep in debt as she crosses all boundaries to get Blue back. Filmed in and around New York City, "White Girl" thrashes through an increasingly high-stakes game of hedonism inspired by first time writer/director Elizabeth Wood's own experiences.