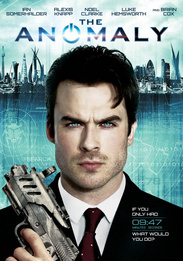 Traumatized ex-soldier Reeve (Clarke) wakes up in the back of a moving van alongside a young boy (Parkinson) held prisoner. But after helping the boy escape, he comes to the terrifying conclusion that hes the kidnapper. Even more startling, five years have passed since he was last awake. Ryan soon learns that hes caught up in a futuristic conspiracy known as Anomaly, Ryans only connection with reality is the dogged pursuit of Ryan by the elegant but sinister Harkin Langham (Somerhalder), who when hes not trying to kill Ryan  explains how to survive his blackouts, lasting exactly 9 minutes and 47 seconds. As he negotiates switching between parallel universes, Ryan teams up with the mysterious Dana (Knapp) to start unraveling the life-threatening mystery in which hes the explosive center. With Harkin dogging and thwarting his every turn, Ryan must summon all his will to challenge his programmed destiny and regain his humanity.