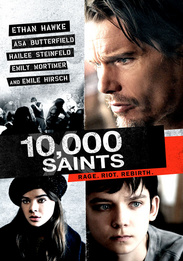 Set in the 1980s, following tragedy, teenage Jude (Asa Butterfield) moves from Vermont to New York City to live with his father (Ethan Hawke) in the punk-fueled East Village. Caught in the chaos of city life, Jude and his friends, Eliza and Teddy (Hailee Steinfeld and Emile Hirsch) embark on a journey of self-realization in a neighborhood on the verge of riots.

Rated R for drug use including teens, and language including sexual references.