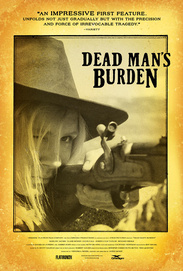 Set in 1870 in the immediate aftermath of the Civil War, DEAD MANS BURDEN is the story of Martha (newcomer Clare Bowen, ABCs Nashville) and her husband Heck (David Call, Tiny Furniture), who are struggling to make ends meet on the rural New Mexico frontier. When a mining company expresses interest in buying their land, Martha and Heck see their ticket to a better life. Their hopeful plans are soon complicated when Marthas oldest brother Wade (Barlow Jacobs, Shotgun Stories), presumed dead during the war, returns to the family homestead after learning of their fathers death. A defector to the Union Army, Wade soon discovers that Martha is hiding secrets of her own. As the two siblings become reacquainted, torn between a desire to reconcile with the only family they have left and their clashing convictions, tension and suspicion continue to mount. Filmed on location in the rugged high desert of northern New Mexico, DEAD MANS BURDEN, shot in the style of a classic western, marks Jared MoshÃ©s directorial debut.